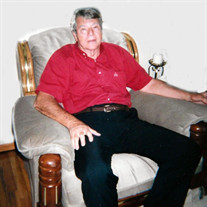 Billy Harrelson, 88, husband of Lila Mae Hucks Harrelson, died at Bethea Retirement Community on Saturday, March 14, 2020. Mr. Harrelson was born on August 7, 1931, in Conway, SC, a son of the late Malcom and Mamie Thompkins Harrelson. He attended Horry County Schools and was an Army Veteran where he served in the 1st Cavalry division in the Korean War. He was quite an entrepreneur, he owned Dr. Pepper and Canada Dry Franchises in Conway and Kingstree, Purina Feed Mill in Rowland, NC, and Harrelson Transfer Lines in Kingstree. Mr. Billy retired from Town of Kingstree as Water Superintendent. He was a member of Cornerstone Baptist Church and served as a deacon. Mr. Billy enjoyed going to church and spending time with family. He was a hard worker and never expected anyone to do something he wouldn’t do. Surviving Mr. Harrelson, in addition to his wife Lila Mae of 68 years, are: his son, Tony (Sybel) Harrelson, of Kingstree; his daughter, Billie Jo (Glenn) Lee, of Lake City; grandchildren, Curtis (Tiffany), Mark, Carrie, and Shane Harrelson; five great grandchildren; and one great-great grandchild. In addition to his parents, Mr. Harrelson was preceded in death by a sister, Edna Baxley; and two sons, Rex Harrelson and Tommy Harrelson. Funeral services will be 1PM Tuesday, March 17, 2020, at Williamsburg Funeral Home Chapel, with burial in Hillcrest Cemetery in Conway. Mr. Harrelson’s family will receive friends one hour prior the service at the funeral home. Memorials may be made to St. Jude Children’s Hospital, 501 St. Jude Place, Memphis, TN 38105-1942. Online condolences may be sent to the family at www.WilliamsburgFuneralHome.com.

The family of Billy Harrleson created this Life Tributes page to make it easy to share your memories.

Send flowers to the Harrleson family.