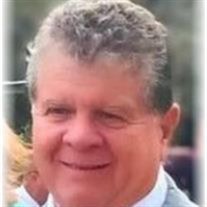 Mr. Charles A. Hinson, 68, husband of Kathy H. Hinson, passed away suddenly on April 27, 2021. Born October 16, 1952 in Conway, Mr. Hinson was the son of the late Wendell Edwin Hinson and the late Lucille Ruby Calhoun Hinson. He was a graduate of Conway High School Class of 1970 and graduated from Coastal Carolina College in 1975. Mr. Hinson served his country in the United States Marine Corps on active duty for 2 years and as a reservist for 4 years. He was a member of Horry Lodge #381 AFM and was a 32nd Degree Scottish Rite Mason. Mr. Hinson was also a member of the Omar Temple of the Shrine and the Omar Peddlers. He worked with Waccamaw Land and Timber for over 30 years and served as president of Apache Campground. Mr. Hinson is survived by his wife, Kathy H. Hinson of Myrtle Beach; his children, Katie Hinson Lewis and husband Cody of Mt. Pleasant, Courtney H. Cleveland and husband Darrin of Myrtle Beach, and Chase A. Hinson of Conway; his grandchildren, Hunter and Grayson Lewis; his brother, Keith C. Hinson and wife Dixie of Myrtle Beach; his sister, Karen H. Ligon and husband Tom of Georgetown; several nieces and nephews; and his dog Toby and cat Reba. Funeral services will be held at 2:00PM Friday, April 30, 2021 at First United Methodist Church of Myrtle Beach, officiated by Rev. Dr. George K. Howle and Rev. Meredith M. Dark. Burial, with military honors, will follow at Hillcrest Cemetery. The family will receive friends at Goldfinch Funeral Home, Conway Chapel, from 5:00PM-7:00PM Thursday, April 29. The funeral service will be available via the Facebook account of First United Methodist Church of Myrtle Beach. In accord with current CDC guidelines face masks and social distancing will be observed for both the visitation and funeral. Memorial donations may be made to the CCU Wendell C. and Lucille Calhoun Hinson Endowed Scholarship in care of Coastal Educational Foundation, P. O. Box 261954, Conway, SC 29528.

Mr. Charles A. Hinson, 68, husband of Kathy H. Hinson, passed away suddenly on April 27, 2021. Born October 16, 1952 in Conway, Mr. Hinson was the son of the late Wendell Edwin Hinson and the late Lucille Ruby Calhoun Hinson. He was a graduate... View Obituary & Service Information

The family of Charles A Hinson created this Life Tributes page to make it easy to share your memories.

Send flowers to the Hinson family.