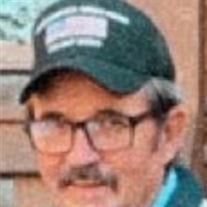 Mr. Curtis Allen Smith, 68, husband of Jane Rowell, passed away at his home on Sunday, November 14, 2021. Born November 9, 1953 in Whiteville, NC he was the son of the late Charles Smith and the late Dora Mae Soles Smith. Curtis proudly served in the United States Army from 1971-1973 and was a Free Mason. He worked as a master pipefitter. He loved his family and enjoyed spending time with them, and was "Mr. Mom" for the cheerleading team. In addition to his parents Mr. Smith was also predeceased by his son, Mitchell Allen Smith, and his granddaughter, Abigail Smith. Survivors include his wife of 16 years, Jane Rowell; his daughters, Nancy Moss, Haley Rowell, and Kelly Carlson; his grandchildren, Chandler Smith, Jordan Smith, Briyyany Byrd, Hazel Smith, and Katherine Moss; his great-grandchildren, Kayleigh Byrd, Jayce Byrd, Emily Byrd, and Ashton Byrd; his sisters, Brenda Moore (Donald) and Faye Smith Reaves; and his 2 beloved furbabies, Ziggy and Gates. Funeral Services will be held at 1:00PM Thursday, November 18, 2021 at Goldfinch Funeral Home, Conway Chapel, officiated by Rev. Mitchell Smith. Burial, with military honors, will follow at Hillcrest Cemetery. The family will receive friends at the funeral home one hour prior to the service.

The family of Curtis Allen Smith created this Life Tributes page to make it easy to share your memories.

Send flowers to the Smith family.