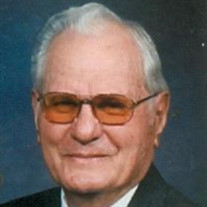 Evan Carlsyle Marlowe, age 86, passed away Wednesday, January 6, 2021. Born September 30, 1934 in Horry County, he was the son of the late Evan Daniel Marlowe and Alice A. Mills Marlowe. Mr. Marlowe was a veteran of the US Army and was formerly employed by Dilmar Oil Company. He was the owner and operator of Jamestown Grocery and Service Station, Jamestown Nursery, and Jamestown Restaurant. He and his wife, Lou Ellen, were married for 63 years and worked together for 57 years on the same street corner in the Jamestown Community of Conway. Mr. Marlowe received many community awards such as the Hometown Hero Award, Man of the Year, and many others. He was proud of these awards which recognized his service to the community where he had chosen to build a business for so many years. Mr. Marlowe was a member of the former East Conway Pentecostal Church, where he served as Sunday school teacher and Deacon. In his final years, he attended church with his daughters at Pleasant Hill Baptist Church and River of Life Church of God. He loved his Lord, people, and you knew he did. His favorite quote, "Can I ask you a question, do you know Jesus loves you and Carlsyle loves you too?" A special thanks is extended to the entire family, who is always there for them, his present and past employees of the store, his special friends who sat, ate, and talked with him (couldn't begin to name you all), the Jamestown community for being his home away from home for almost 60 years- he loved all of you, the patrons of Jamestown Restaurant (formerly Jamestown Grocery and Service Station), his Red Hill community neighbors and East Conway Pentecostal Holiness Church family, Conway Medical Center Medical Floor and Critical Care Unit Staff, and the doctors and nurses who took care of him and those taking care of others. You are all in our prayers for serving on the front line of this crisis. Along with his parents, Mr. Marlowe was predeceased by his wife, Lou Ellen Holt Marlowe, who was the love of his life; two brothers, Jesse Milford "Pete" Marlowe and Everette Ray Marlowe; and a sister, Alice Faye Thompson. Surviving are two daughters, Karen Ann Hutson and husband, Mack Hutson and Beverly Marlowe; three grandchildren, William Nathan Hutson (Katherine), Timothy Micah Hutson (Loren), and Benjamin Evan Hutson (Lauren); five great-grandchildren, Abigail Lee Hutson, Tyson Micah Hutson, Caroline Beverly Hutson, Evan Grace Hutson, and Caleb Luke Hutson; a brother, Joseph Earl Marlowe (Kristi); brothers-in-law, Rev. Bill Thompson, Spivey M. "Snook" Holt, and James Wilson Holt; an adopted and loved son, David Nesmith; his special fishing buddy, Benjamin Micey Onley; and many cousins, nieces, and nephews. Services have been postponed until a later date

Evan Carlsyle Marlowe, age 86, passed away Wednesday, January 6, 2021. Born September 30, 1934 in Horry County, he was the son of the late Evan Daniel Marlowe and Alice A. Mills Marlowe. Mr. Marlowe was a veteran of the US Army and was formerly... View Obituary & Service Information

The family of Evan Carlsyle Marlowe created this Life Tributes page to make it easy to share your memories.

Send flowers to the Marlowe family.