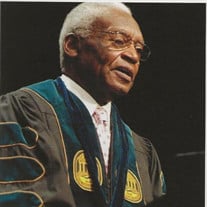 George L. Williams, Sr, was born in Florence, SC. He was one of six children born to the late George Williams and Josephine Brockington Williams. He was predeceased in death by four of his five siblings and parents. His brother, Robert Williams is the lone surviving sibling. George attended public schools in Florence and graduated in 1949 from Wilson High School where he was elected class president. In 1954, he graduated from South Carolina State University (then South Carolina State College) with a Bachelor’s of Arts Degree in Pre-Law. In 1960, he received his Master’s of Science Degree in Education and Public School Administration from SCSU. In 1960, he also successfully passed the state board examination to become a licensed funeral director. George Williams began his career in 1956 in Horry County School District as an Economics and Government teacher at Chestnut High School. His career in the Horry County School District spans over 30 years. He has touched the lives of so many students from Whittemore, Conway, and North Myrtle Beach High Schools. He took the reins as Principal of North Myrtle Beach High School as the school district’s first and only African-American High School Principal from 1974-1986. He established firsts while at North Myrtle Beach, such as establishing the first Junior Navy ROTC program in the region. After “retirement”, George served as Director of Minority Student Relations at Coastal Carolina University. He was the first African-American teacher at Coastal Carolina University and created foundation programs for what is now the thriving Office of Multicultural Student Services. He served as Chairman of the Board of Trustees for Horry-Georgetown Technical College, Trustee Board member for Conway Hospital, Conway Hospital Foundation Board, First Citizen Bank, Coastal Carolina and in 2005 he was named as an Honorary Coastal Founder. He was initiated into Omega Psi Phi Fraternity, Inc., 50 years ago, in January of 1970. He holds life membership in the fraternity. George L. Williams, Sr (affectionately called “Daddy George” or Papa) was predeceased by his loving wife of 48 years, Jean McKiever Williams who died in 2002 and his oldest child, Sandra Williams Brown, who died in 2018. His memory will be cherished by his children: George, Jr. (Deirdre), Karen Williams Beaty (Olin), Charles Williams; his grandchildren: Toni Brown King (Jerrett), George (“Trey”) III, Garrett and his great grandchildren: Jaiden, Raine, and Liric. Also to cherish his memory, his brother, Robert Williams, a host of nieces, nephews, cousins, students and friendships to last an eternity.

George L. Williams, Sr, was born in Florence, SC. He was one of six children born to the late George Williams and Josephine Brockington Williams. He was predeceased in death by four of his five siblings and parents. His brother, Robert Williams... View Obituary & Service Information

The family of George LeBlanche Williams Sr created this Life Tributes page to make it easy to share your memories.

Send flowers to the Williams family.