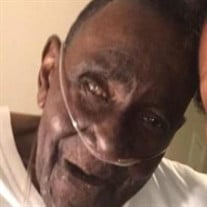 Herman Cooper (affectionately called “Pa”, “Bobby” and/or “Charlie”), age 78, departed from this life peacefully on Monday, March 23rd, 2020 at the home he shared with his granddaughter Jessica in Conway, SC. Herman Cooper was the son of the late Mr. Charlie and Mrs. Marie Whitfield Cooper. He was born to them at home on February 9th, 1942 in Salters, SC. He is predeceased by his wife Iris Jean Woods Cooper, one sister, Lucilla Bull and one grandchild, William H. Cooper, Jr. Herman grew up in Salters with his parents and sister, Annie Clark, before leaving home at an early age to work in the tobacco market. While working and traveling with the tobacco market, Herman landed in Winston Salem, NC and met his love Iris. They got married on August 18th, 1962 and gave birth to their only child, William H. Cooper, Sr., in November of that year. After the birth of their son, Herman and Iris moved to Connecticut for a brief time before returning to Winston Salem. Once back in Winston Salem, Herman got a job at Cooks Warehouse where he was able to continue working and traveling with the tobacco market. Once he retired from tobacco he worked in the kitchen at Forsyth Medical Center in Winston Salem until he retired from there at age 74. Left to cherish his memory is one sister, Annie Clark (New Haven, CT), one brother-in-law, Roosevelt (Gladys) Stephenson (Winston Salem, NC), one son William H. (Christina) Cooper, Sr.(Las Vegas, NV), one special “adopted” daughter Vanessa (Angelo) Keyes (Kinston, NC), eight grandchildren, Jessica (Clyde) Reed of the home, Natasha Cooper, Iris Cooper, Veronica Cooper-Tucker, Angelo (AJ) Cooper, Carolyn Cooper, Gianna Cooper and Matthew Cooper all of Las Vegas, NV, two “adopted” grandsons, Angelo Keyes, Jr. (Charleston, SC) and Denzel Keyes (Kinston, NC), three great-grandchildren, Cadence Cooper (Las Vegas, NV), Journee and Cairo Reed of the home as well as a host of nieces, nephews, cousins and friends. A private graveside service will be held at 12:00 noon Friday, March 27, 2020 at Hillcrest Cemetery, Conway. Ocean View Funeral Home Myrtle Beach Chapel is assisting the Cooper Family.

The family of Herman Cooper created this Life Tributes page to make it easy to share your memories.

Send flowers to the Cooper family.