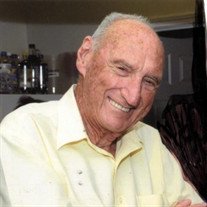 John “Jack” Allen Platt, 93, formerly of Holliston, MA; passed away peacefully with his loving family by his side on Monday August 9, 2021 at his home in Conway, South Carolina. He was born on September 3, 1927 in the Province of Nova Scotia, in Canada to the late Clarence M. Platt & Mary Margaret MacDonald Platt. Along with his parents, Jack is reunited in passing with first wife, Barbara Elizabeth Platt; second wife, Judith Loftus Platt; sisters, Pearl Clough & Alice Warner as well as his brother, Clarence Martin Platt. Jack proudly served our country in the United Sates Navy during World War II. Following his honorable discharge, Jack attended Bryant and Stratton College. He would become a skilled terminal manager for many trucking companies in MA, and NJ. He went on to work in sales for Fenwal Corp in MA and was finally able to retire. Upon Jack’s relocation to Myrtle Beach, he became instrumental in starting the Honor Flight out of MB for the WWII Vets to see their memorial in DC and proudly started the Veteran’s March. In his free time, Jack still relished being active in his community and was a lifetime member of the SSB Moose Lodge, DAV, VFW, American Legion, and Elks Lodge. Always one to stay active, Jack appreciated time spent playing bridge with partner, Phil Johnson and was a member of the Pawleys Island Bridge Club; and found peace on the golf course. Above all else, Jack loved his family with his whole heart. He will be deeply missed but fondly remembered for his quick wit, love for golf, his family and country. Left to cherish Jack’s memory are his adoring daughters, LaNelle Brown and husband, Charles of Conway, Barbara Williams of Garden City, & Beverly Hebert of Myrtle Beach; six grandchildren; nine great-grandchildren & three great-greatgrandchildren; beloved pets, Bailey & Pippa; as well as a large loving extended family and many supportive friends and neighbors. A Graveside Service will be held at Hillcrest Cemetery, 1000 Hwy 544, Conway, SC 29526 at 3:30PM on Friday August 13, 2021. At the request of the family, please consider memorial contributions in lieu of flowers. Donations in Jack’s name may be made to the Combat War Veterans Motorcycle Association of Myrtle Beach, Chapter SC 34-3, at, https://www.cvma34-3.com/

John &#8220;Jack&#8221; Allen Platt, 93, formerly of Holliston, MA; passed away peacefully with his loving family by his side on Monday August 9, 2021 at his home in Conway, South Carolina. He was born on September 3, 1927 in the Province of... View Obituary & Service Information

The family of John "Jack" Allen Platt created this Life Tributes page to make it easy to share your memories.

Send flowers to the Platt family.