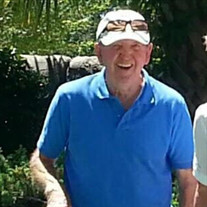 John McGuirk, age 82, husband of Marie McGuirk, passed away on Tuesday, June 15, 2021 at The Lakes at Litchfield in Pawley’s Island. Born October 8, 1938 in Baldoyle, Ireland, John (“Sean” to his family and friends) was the son of the late Bernard and Ellen McGuirk. John was one of seven children. He and his wife, Marie emigrated from Ireland to the U.S. in 1964 where they settled in Connecticut until moving to South Carolina in 2017. John loved life, always had a smile on his face, and would join in singing any kind of music - especially Irish ballads, even if he was slightly off key. He started playing golf as a child in Ireland, and the game became a lifelong passion. Marie remained the true love of his life from the time they met. John enjoyed meeting new people and seeing new places, and he and Marie traveled extensively before moving to Murrells Inlet. Survivors include John’s wife, Marie, of 57 years, their son, Martin McGuirk and his wife Christine of Virginia and three grandsons, Jeff, Sean, and Matthew, also of Virginia. He is also survived by three of his six sisters Annie, Carmel, and Veronica and leaves behind numerous nieces and nephews in the U.S., Ireland, the U.K., Australia, and New Zealand. Calling hours have been omitted. A Memorial Service will be celebrated on Tuesday, June 22, 2021 at 10 a.m. at Saint Michael’s Catholic Church: Address 542 Cypress Ave, Murrells Inlet, SC 29576. In honor of his wishes, there will be a private inurnment at Hillcrest Cemetery in Conway, SC. The family would like to express sincere thanks for the outstanding care provided to John by The Lakes at Litchfield and Tidelands Community Hospice Care. In lieu of flowers, expressions of sympathy can be made to Shriner’s Hospital Honor a Life and Give in Memory | Shriners Hospitals for Children® (lovetotherescue.org), and/or the National MS Society at Donate | National Multiple Sclerosis Society (nationalmssociety.org).

The family of John "Sean" McGuirk created this Life Tributes page to make it easy to share your memories.

John McGuirk, age 82, husband of Marie McGuirk, passed away on...

Send flowers to the McGuirk family.