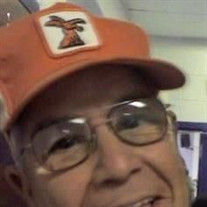 Jesse Leroy “Roy” Sessions, age 77 went home to be with his Lord and Savior on Friday, February 11, 2022, after a brief battle with Covid. He was the son of the late Edgar Leroy Sessions and Gladys Graham Sessions. Mr. Sessions, a lifelong resident of Conway, SC, was retired from the Horry County Department of Public Works and was previously employed with Georgia Pacific for 22 years. In his younger days, he drove long distance trucks and he could back one into the smallest space. He also had an uncanny ability to remember directions to anywhere he had been. The apple of his eye was his grandson, Colby. He was an avid fisherman and enjoyed fishing with his grandson Colby and with his buddies on the many local rivers. One of his daily routines was meeting his friends at Bojangles every morning. He loved watching westerns, and even named his palomino horse that he had in the 70s Trigger. Mr. Sessions was a lifelong member of El-Bethel United Methodist Church and faithfully attended. Roy loved his family (especially his grandson, Colby), fishing, his Ford pickups, handing out Atomic Fireball candies, growing vegetables in his garden every year, and hiding purses at church. If any of the ladies missed their purses, they looked to Roy knowing he had hidden it somewhere. Friends and family learned quickly not to take any candy that Roy offered. He always had Atomic Fireball candies in his pocket and the first thing he did was offer you one. Most people took one at least once. It also wasn’t safe to believe him when he said a pepper wasn’t hot. Roy always had his pocketknife and if it didn’t shave, it was dull to him. He was a member of the Litchfield Camp 132, Sons of Confederate Veterans. He also a had the distinction of being a Real Grandson, as his grandfather, John Marion Sessions, was a veteran of the Civil War. He is predeceased by his parents and a grandson, Cody Leroy Suggs, his paternal grandparents, John Marion Sessions and Delphia Godbolt Sessions, and his maternal grandparents, George and Addie Graham. He is survived by his wife of 49 years (their 50th anniversary would have been in May), Avis Todd Sessions, a daughter Crystal Suggs (Tracy), a sister Gail Sessions Altman, a grandson Colby Suggs, and a niece Monica Altman. His best friend Paul Johnson, Sr. and close friends Ralph Euler, David Johnson, Macky Britt, LT Todd, Edwin Johnson, and Ernest James. Many other relatives and friends will miss him dearly. The family would like to thank the doctors, nurses, and medical staff at Grand Strand Regional Medical Center for their excellent care and kindness during his illness. Services will be 1:00 PM Thursday, February 17, 2022 at El-Bethel United Methodist Church with Rev. Dickie Knight, Rev. Darrall Ricketts, and Rev. Wayne Skipper officiating. Burial will follow at Hillcrest Cemetery. The family will receive friends prior to the service from 12:00 – 12:45 at the church.

Jesse Leroy &#8220;Roy&#8221; Sessions, age 77 went home to be with his Lord and Savior on Friday, February 11, 2022, after a brief battle with Covid. He was the son of the late Edgar Leroy Sessions and Gladys Graham Sessions. Mr. Sessions,... View Obituary & Service Information

The family of Leroy "Roy" Sessions created this Life Tributes page to make it easy to share your memories.

Jesse Leroy “Roy” Sessions, age 77 went home to be with his Lord...

Send flowers to the Sessions family.