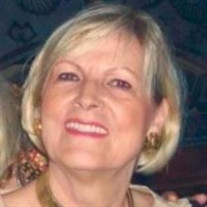 Maria K. Kahl, also lovingly known as Marianne and Omi, passed away on March 26, 2021 at Grand Strand Medical Center in Myrtle Beach, SC at the age of 83. She is now reunited in heaven with her husband, Walter Richard Kahl Sr., of 50 years. Marianne was born on September 20, 1937 in Oberursel, Germany to Phillip and Elizabeth Haub. She was the oldest of 7 children and was raised in a hardworking Catholic family that attended St. Ursula Kirche Church. Marianne moved to the United States to be with the love of her life, Walter, where they married in New Jersey on December 22, 1956 and raised a family with three children. Marianne was a talented and well-known designer with many accomplishments including the design, sewing, and installation of draperies for the home of Jackie Kennedy Onassis. She loved bright colors, flowers, fashion, interior design, family photos, and family & friends. She was an amazing cook and always enjoyed bringing people together with a delicious meal surrounded by beautiful tablescapes. Marianne and Walter retired in Myrtle Beach, SC where she resided for the most recent 34 years. She loved God whole heartedly and attended Christ United Church for the past 5 years. Marianne is survived by her three children, Susan May De Paul, Walter Richard Kahl Jr., and Heidi Maria Venturini (Peter Jr.). She is very proud of her 7 grandchildren, Courtney Norris (Charles), Ryan De Paul, Walter Kahl III (Cassie), Peter Venturini III, Ashley Kahl, Katrina Venturini, and Sabrina Venturini. Her three great grandchildren were the apple of her eye, Chase Norris, Hunter Kahl, and Addison Kahl. Also survived by Marianne are her two sisters, Elsbeth Wagner (Dieter) and Gabi Lindemann (Peter), her sisters-in-law, Carrie Haub, Helen Thompson, and Judith Kahl, as well as her brother-in-law Donald Kahl. Predeceased by Marianne are her parents, Phillip and Elizabeth Haub, her three brothers, Herbert Haub, Robert Haub (Trude), and Horst Haub, her brothers-in-law, Henry Kahl Jr. (Eleanor) and William Thompson Sr., mother-in-law, Helen Kahl, and father-in-law, Henry Kahl Sr. A funeral service will be held on Wednesday, April 28, 2021, at 2pm ET in the Open Air Chapel at Hillcrest Cemetery in Conway, SC. Marianne’s family would like to express their deepest appreciation to everyone that has reached out with support. In lieu of flowers, donations are welcomed to the American Stroke Association. Marianne was admired and loved beyond measure by her family and friends. She had the most beautiful and generous soul that will continue to make people smile for many years to come with just the thought of her.

Maria K. Kahl, also lovingly known as Marianne and Omi, passed away on March 26, 2021 at Grand Strand Medical Center in Myrtle Beach, SC at the age of 83. She is now reunited in heaven with her husband, Walter Richard Kahl Sr., of 50 years. Marianne... View Obituary & Service Information

The family of Maria K Kahl created this Life Tributes page to make it easy to share your memories.

Send flowers to the Kahl family.