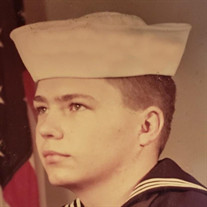 Obituary for Mike "Papa Mike" Richardson Conway, SC Mr. Michael Benjamin Richardson Sr., beloved father and grandfather, passed away Friday, February 11, 2022 in Conway, SC. He was 74 years young. Michael "Mike" was born in Mullins, SC, son of the late Franklin Benjamin Richardson and the late Dorothy Louise Daniels Richardson. He was a United States Navy veteran during the Vietnam era, where he traveled overseas while serving his country. After his time spent serving in the Navy, he returned to Conway and spent the remainder of his career with Santee Cooper at the Grainger Generating Station, before retiring. Mike loved working out in his shop, spending time with his family, and fishing in the Inlet. He passed his love of classic cars and drag racing to his sons and grandchildren. “Pop” or “Papa Mike” is what his family called him and everyone else just called him a friend. There was not a thing he could not find a way to fix; whether it was a car or a bump in life, he always had a way of making you feel like everything was going to be okay, and his gift to do so, blessed us all, and will be deeply missed. In addition to his parents Mike was predeceased by his brothers, Donald Frank Richardson and William Jesse Richardson. Survivors include his two sons, Michael Benjamin Richardson, II and his wife Cara Leigh of Conway and Travis Franklin Richardson and his wife Nicole of Raleigh, NC, and their mother, Sherrell Causey Richardson of Conway; his grandsons, Gabriel Quinn Richardson of Raleigh, NC and Michael Benjamin Richardson, III of Conway, SC; his granddaughters, Evan Brenleigh Richardson of Conway, SC, Olivia Claire Richardson of Raleigh, NC, and Erica Danielle Hoskins of Raleigh, NC. Funeral services, with military honors, will be held at 3:00 PM Wednesday, February 16, 2022 at the Open Air Chapel at Hillcrest Cemetery, officiated by Rev. Rodney Norris. The family will receive friends at Goldfinch Funeral Home, Conway Chapel, from 6:00 PM – 8:00 PM Tuesday, February 15, 2022. Memorial donations may be made to the Horry County Animal Shelter, 1923 Industrial Park Road, Conway, SC 29526.

The family of Mike "Papa Mike" Richardson created this Life Tributes page to make it easy to share your memories.

Send flowers to the Richardson family.