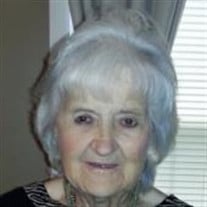 Rena Louise Cheshire Nobles died Thursday morning at MUSC Lancaster Hospital in Lancaster, SC. Rena Nobles was born in Fayetteville, NC. on July 26,1931 to Arthur and Nellie Faircloth Cheshire. Along with her parents and siblings, Rena moved to Chadbourn, NC in the mid 1940's. Rena was the oldest child and assumed the responsibility of mothering one of her younger brothers who was handicapped. She was a kind compassionate soul, always busy doing for her family and neighbors. She loved her church and had a special love for gospel music, THE GAITHERS were her favorite singers and she was content to keep that TV channel on 24 hrs a day. Often in her daily tasks around the house, you could hear Rena humming a gospel song with an occasional Johnny Cash tune. Heaven's choir increased by one Thursday morning when Rena joined in the singing. Rena was a faithful worker in various capacities in the Chadbourn Pentecostal Holiness Church until a handsome Airman, Floyd Nobles USAF, stole her heart. They married and they spent the next 20 + years at various AF BASES until Floyd retired while stationed at Myrtle Beach AFB. After Floyd's early death at age 62, Rena spent her remaining years at Myrtle Beach taking care of her daughter, Carolyn, who later died from cancer. She was always the giver whether it was a child, grandchild or neighbor, Rena shared herself and her resources to any one she thought needed her help. Two years ago she move to Kershaw, SC to live with her grandson, Mike and his wife Sharon. In all that Rena did it was always with a smile and a song in her heart. Rena was preceded in death by her parents, Arthur and Nellie Cheshire, her husband, CMGT Floyd W. Nobles; a daughter, Carolyn McCracken; brothers, Wilbur and Ernest Cheshire and two infant sisters. Survivors include two sons, Mike and Bruce Nobles of Myrtle Beach, S.C.; sister, Mavis Hall of Fayetteville, N.C.; three grandsons, Mike Nobles (Sharon) of Kershaw, SC, Caid Nobles and Reed McCracken, Myrtle Beach, SC, and two great grandsons Michael Nobles and Hunter (Angel) Nobles. Graveside services will be held at a later date at the Hillcrest Cemetery in Conway, SC. A special thank you for all the nurses and CNA’s at White Oak Manor and at MUSC Lancaster who provided care for her in her last years and days.

The family of Rena Louise Nobles created this Life Tributes page to make it easy to share your memories.

Send flowers to the Nobles family.