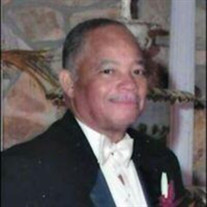 On January 16, 1943, God blessed the late Rachel Coe and Henry Jackson of Leesbburg, VA with their first child, Robert Wesley Jackson. Affectionately known as Bobby/Bob, he was full of charm, charisma and loved the subtle lifestyle of country living, and family functions. Bob enjoyed his life, and lived it to the fullest through dancing, fishing, traveling, and his love of golf. After college, Bob enlisted into the United States Air Force where he served for four years. While in service he played a variety of sports, and was named “an All-Around Sportsman.” He played basketball, football, bowling, and of course golf, for which he was awarded numerous trophies and prizes. Bob, an avid golfer loved his golf families from Henson Creek & Diamond Back Golf Clubs. Bob retired in 2002 from the Federal Government. He was employed in the Intelligence Division as a Communication Specialist with The Department of Justice for twenty-nine (29) years. From a previous marriage, Bob was blessed to be the father of two amazing sons: Robert W. Jackson (Bobby Jr.) and Anthony Jackson. After the marriage to his current wife Dianne of sixteen years (16), and an additional nine years prior to marriage; he was blessed to have three bonus adult children, Donna Hartsfield, Karim and Aaliyah Abdullah. Between the two blended families they had eight grandchildren and one great grandchild. He leaves memories to be cherished by his beloved wife Dianne, his sons Bobby Jr and Anthony Jackson (Aulelei), and his bonus children Donna Hartsfield, Karim and Aaliyah Abdullah. In addition, his siblings Mae Ellen Marlow (Charles), Amanda Williams, and Anita Henry. His grandchildren (Elias, Amiia, Amel & Avery Jackson), bonus grandchildren (Imani Hartsfield, Karim McCallum, Tyreik Rush & Shakerra Abdullah) and great-grandson Rylan Hartsfield. In-laws including Carol Broom, Donnie Jones (Gina), Jeanette Dawodu, Doreen White (William), James Josey, Daniel, and Sterling Brunson (Kim). In addition, he leaves a host of nieces, nephews, cousins, associates, and friends. Funeral Services will be held on Saturday March 19, 2022 at 12:00pm at Watson Funeral Services Chapel. The family will receive friends one hour prior to the service at the funeral home. Burial will follow at Hillcrest Cemetery.

On January 16, 1943, God blessed the late Rachel Coe and Henry Jackson of Leesbburg, VA with their first child, Robert Wesley Jackson. Affectionately known as Bobby/Bob, he was full of charm, charisma and loved the subtle lifestyle of country... View Obituary & Service Information

The family of Robert W Jackson created this Life Tributes page to make it easy to share your memories.

Send flowers to the Jackson family.