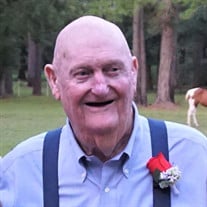 Roosevelt H. Bellamy, beloved native son of Myrtle Beach, S.C. was welcomed into the arms of Christ on 12/14/2021 at McLeod Regional Medical Center in Florence S.C. He joined those who had gone before him, who he missed so very much. Born on May 13, 1933, son to Emory and Ethel Patrick Bellamy, receiving his name from our 32nd president of the U.S. who had just taken office and was the hope of all during the Great Depression. He was “Brother” to Joseph “Junior” Bellamy, Adeline Bellamy Mercer and James “Jimmy” Bellamy. He was “Rosie” to the love of his life, Marilyn L. Bellamy, and they were married for 57 years. He was “Daddy” to his two daughters, Cindy Ammons Holland (Tim) and Wendy Anderson. He was “Papa” to his five grandsons; Ryan Ammons (Mandi), Rhett Ammons (Sayla), David Anderson, Jr. (Kristen), Zachary Anderson and Jacob Anderson (Paula) and eight great-grandchildren; Samuel Anderson, Eliana Anderson, Emory Anderson, Malden Ammons, Adalyn Ammons, Maybin Ammons, Malachi Ammons and Marcus Ammons, as well as Kaylin Holland Brewer (Tyler) and Bentley and Alyssa Holland (Delo) and Alorah. He was “Uncle Roosevelt” to multiple generations of nieces and nephews. He was “My Very Best Friend”, to countless individuals. He was “Mr. B” to so many who revered and respected him as a dependable source of positivity. He was endeared to all, including an extended family of cousins, life-long friends, neighbors and members of his community. He was one-of-a kind, a hallmark of the community, known for his integrity, dependability, generosity, and empathy for others. These were lifelong traits that drew others to him, always consistent and true. He was a hard worker, having made his living working for Burroughs and Chapin Company for forty-two years, while also working his small family farm, as well as a tree removal/firewood service. He was a lifelong member of First Baptist Church of Myrtle Beach. He was a great storyteller, all real-life accounts of his childhood, adventures with lifelong friends from high school days who he maintained close contact with until his passing and everyday encounters that became great sources of recollection. His deep roots and affection for his native Myrtle Beach, his family’s role in its development and his home on Emory Road were always a topic of conversation and an undeniable source of belonging and pride. It is not everyday that an individual such as this one graces our lives. For those of us who had a special name for him, have truly been blessed. We were given a gift and an example to live by. For as long as we shall live, the memory of this individual will live on and will serve as a guidebook to live our best lives, one of a servant’s heart and hands. A graveside service is being limited at this time to family, on Tuesday, 12/21/2021, due to Covid-19 concerns. Anyone in attendance will be asked to wear a mask and socially distance. A celebration of his life will be planned around his birthday, 5/13/2022, and will be announced to all who would like to join his family in remembering him and his humble, but indelible legacy. His family would like to extend a special thank you to Brenda and Cathy Bellamy for the tremendous love and support they provided him over the past six years. Also, sincere gratitude for the excellent care and caring that he received from the fine team of healthcare professionals at McLeod Regional Medical Center.

Roosevelt H. Bellamy, beloved native son of Myrtle Beach, S.C. was welcomed into the arms of Christ on 12/14/2021 at McLeod Regional Medical Center in Florence S.C. He joined those who had gone before him, who he missed so very much. Born on... View Obituary & Service Information

The family of Roosevelt Henry Bellamy created this Life Tributes page to make it easy to share your memories.

Send flowers to the Bellamy family.