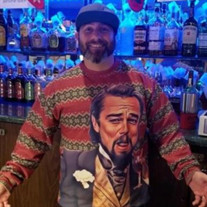 Ryan Michael Brennan, age 42 of Myrtle Beach, died from injuries sustained in a motorcycle accident on Friday morning, March 5, 2021. Ryan was born on February 10, 1979 to Patricia Williams Rodriguez and David Lee Brennan. Raised in Falls Church, Virginia, Ryan was a graduate of Falls Church High School, class of 1997. In 2008, Ryan moved to Myrtle Beach with his family. Ryan was employed at the Quarter Deck Beachside Bar and Grill at the time of his passing. Ryan leaves behind his beloved wife, Brandy Nicholson Brennan and their four beautiful children: Alyssa, Britney, Evan, and Dylan Brennan. He also leaves his parents; Patricia and David both of Myrtle Beach, his brother, Blair P. Brennan of Ruther Glen, VA., and half-brother Adam Wesley Rodriguez of Curtis Bay, MD. Also left behind to cherish his memory are: his Grandmother, Doris M. Williams of Locust Grove, VA., his Mother-in-law, Carolyn Bondurant, Uncle David J. Williams III of Manassas, VA., Aunt Karen Williams Harrington of Bejou, MN., and his Uncle Richard M. Brennan of Virginia, his lifelong family friend; Janet Terry, along with several cousins and family members. Ryan also leaves to mourn, his K-9's: Bentley, Xena, and Koda, as well as three granddogs: Bucky, Rossi, and Lilo. Ryan lived life adventurously, enjoying hobbies such as fishing, kayaking, crabbing, or anything on the water. He was passionate about his guns, his motorcycles, and most importantly, his family and friends. He was a very well known and loved person within the community and knew how to show everyone what a good time looked like. He loved cooking and eating but couldn't bake for anything even though he tried. Ryan was a kind, caring, hard-working, and family-oriented type of guy. As he would always say, "PEACE NUGGETS." In lieu of flowers please consider making donations to his wife Brandy and their four children. Funeral services for Ryan Michael Brennan will be conducted Friday, March 12, 2021 at 2:00 PM at Lewis Crematory & Funeral Services Chapel. The family will receive friends one hour prior to the funeral service. Burial will be at Hillcrest Cemetery & Chapel located at 1000 SC-544.

The family of Ryan Michael Brennan created this Life Tributes page to make it easy to share your memories.

Send flowers to the Brennan family.