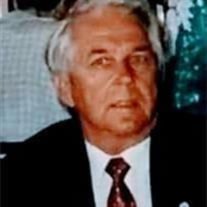 Stanley (Mutt) Levon Allen, age 90, of Myrtle Beach, S.C. and Daytona Beach, Florida entered the church triumphant on October 22, 2021 after a brief illness. He was loved, admired and respected by all who knew him. Stanley was born September 14, 1931 in Bayboro, S.C., son of the late B. Stanley Allen and Lettie Tyler Allen. After the death of his father, he quit school to run the farm and take care of his mother. He worked as a tobacco farmer, tobacco buyer /speculator for R.J. Reynolds Tobacco Company. While traveling on the tobacco sales circuit and spending a lot of time in motel rooms, he realized the profit potential in building motels. He built his first motel in Myrtle Beach, S.C. in the 60's then expanded to Daytona Beach.. He built, operated and sold over 20 motels during his career. He lived life to its fullest with his love of flying, boating, riding motorcycles and being with his family. He was a Shriner with the Omar Shrine Temple for over 50 years. He was a member of the Harley-Davidson motorcycle brigade. He was a member of Halifax Yacht Club for over 25 years in Daytona Beach, Florida. He is survived by a son, Barry Levon Allen of Daytona Beach and a daughter Natalie Allen of Myrtle Beach, S.C.Two nieces Judy Allen Kirby of Conway, S.C., Joanne Johnson Harwell, of Mt Pleasant, S.C.and two nephews, Robert Stanley Johnson of Hemingway and Farrell Strickland of Eutawville, S.C. In lieu of flowers, contributions may be made to The Shriners Hospital for Children, Halo Program, 950 West Faris Road, Greenville, S.C. 29605 in his memory. The family will receive friends at a Visitation at Goldfinch Funeral Home, Conway Chapel, 610 Beaty Street on Friday October 29 from 5-7pm. The funeral services will be held Saturday, 3pm. October 30 at Hillcrest Cemetery and Mausoleum, 1000 SC-544, Conway, S.C. A Celebration of Life will be held at a later date in Dayton Beach, Florida.

Stanley (Mutt) Levon Allen, age 90, of Myrtle Beach, S.C. and Daytona Beach, Florida entered the church triumphant on October 22, 2021 after a brief illness. He was loved, admired and respected by all who knew him. Stanley was born September... View Obituary & Service Information

The family of Stanley L Allen created this Life Tributes page to make it easy to share your memories.

Send flowers to the Allen family.