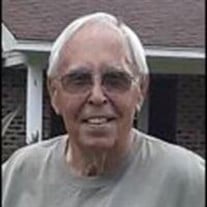 Taft Skipper Jr., 83, passed away August 12, 2021 at Conway Medical Center. He was born July 30, 1938 in Conway, a son of the late Taft Skipper Sr. and Mary Moore Skipper. He was also predeceased by his son-in-law, Kenneth “Kenny” Thomas. Taft was a loving husband, father, grandfather, papa, brother and friend, who loved to spend time with his family, his Peddler family and his four great grandchildren. After retiring from serving in the US Air Force and Army for twenty years, he opened Skippers Upholstery Shop where he was owner/operator for twenty-five years. Along with being a member of the Omar Peddlers, he was a Mason of Lodge 381 for over forty-three years. An avid outdoorsman, he enjoyed fishing. Mr. Skipper is survived by his wife of sixty-two years, Alva Jane Stephens Skipper; children, Annette Skipper and Angie Thomas; siblings, Val Jean Brown, Eugene Skipper, and Mary Dean Watts; grandchildren, Aaron Bryant (Kimberly) and Kirsten Hardee (Ray Jones); great grandchildren, Apollo Bryant, Peyton Jones, Dominic Bryant, and Grayson Jones, along with many other family and friends who will miss him dearly. Funeral Services will be held 3pm Thursday, August 19, 2021 at North Conway Baptist Church with Dr. Jeff Gaskins officiating. Burial will follow at Hillcrest Cemetery. The family will receive friends one hour prior to the service at the church.

The family of Taft Skipper Jr created this Life Tributes page to make it easy to share your memories.

Send flowers to the Skipper family.