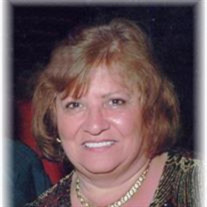 Myrtle Beach…Vera Pagliari Fusco, age 79, wife of the late Nick "Chef" Fusco, passed away peacefully at the home of Matthew, Dana and their family, in Pawleys Island on Monday, December 20, 2021. Mrs. Fusco was born August 22, 1942 in Scanno, Italy, a daughter of the late Giovanni and Lucrezia Palleta Pagliari. She moved to the United States in 1964 from Scanno, Italy living in Pittsburgh, PA until moving to Myrtle Beach in 1986. Along with her husband, Mrs. Fusco was owner and operator of Fusco's Restaurant in Myrtle Beach. She loved to cook, travel, entertain, but most of all, spend time with her grandchildren. Mrs. Fusco was predeceased by a sister, Teresa Iafolla and a brother, Eustachio Pagliari. Surviving are a daughter, Cristina Yacoviello and her husband, Tony, of Midlothian, VA, two sons, Nicholas Fusco and his wife, Lisa, of Myrtle Beach and Matthew Fusco and his wife, Dana, of Pawleys Island, five grandchildren, Neil Triplett (Mackenzie), Nicole Triplett, Andrew Fusco, Alex Fusco and Mia Fusco, a great-grandson, Brantley Triplett and her companion, Vincenzo Salpietro. A Mass of Christian Burial will be held at 11:00 AM Monday, December 27, 2021 at St. Andrew Catholic Church with Father Emerson Rodriguez officiating. Inurnment will follow at Hillcrest Mausoleum directed by Goldfinch Funeral Home, Conway Chapel. The family will receive friends from 10:00 AM until 11:00 AM Monday at the church. Memorials may be sent to Tidelands Hospice, 2591 North Frazier Street, Georgetown, SC 29440 or to The ALS Association South Carolina Chapter 130 Gardeners Circle PNB 622, Johns Island, SC 29455.

Myrtle Beach&#8230;Vera Pagliari Fusco, age 79, wife of the late Nick "Chef" Fusco, passed away peacefully at the home of Matthew, Dana and their family, in Pawleys Island on Monday, December 20, 2021. Mrs. Fusco was born August 22, 1942 in... View Obituary & Service Information

The family of Vera Pagliari Fusco created this Life Tributes page to make it easy to share your memories.

Send flowers to the Fusco family.